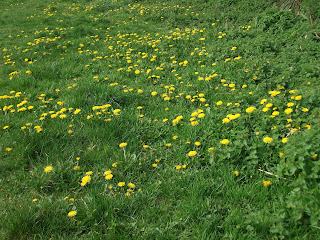 What a very pretty little flower the dandelion is, yet very much maligned. Not seen as a friend of the gardener as they can; without a doubt, be very invasive. The very successful seed dispersal method guarantees reproduction, and the long deeply embedded tap roots, are so very hard to remove completely, yet in my opinion why would one want to? The humble dandelion is such a useful little plant, and also very attractive. How pretty this little meadow in South London appears, dappled and golden, as an orange tipped butterfly jitters carelessly over the blooms in the spring morning sunshine.

The dandelion, or dent-de–lion, named, as I had always imagined, as the leaves resemble the teeth of a lion, not that I should think for one moment that the person providing this name, looked the lion, right in the jaw, and thought ah-ha, ‘this resembles the leaves of a little yellow plant I have seen;’ or perhaps, ‘if I was ever to see the teeth of a lion, this is the shape I would imagine them to have’. However it appears I was mistaken on both counts, as according to Michael Jordan in Plants of Mystery and Magic, (2001) ‘The name Dandelion comes from the French dent de lion, not because of the shape of the leaves, but because the lion was considered a symbol of the sun and the flower is sunlike.’

Another French name placed upon the dandelion is piss-en-lit or as I was instructed as a child, wet-the-bed. It does appear that partaking of the dandelion stimulates urination, and Culpeper’s heading for this plant is ‘Dandelion, Vulgarly called Piss-A-Beds’ he goes onto relate how ‘it opens the passage of urine in both young and old; powerfully cleanses the imposthumes and inward ulcers in the urinary passage, and by its drying and temperate quality doth afterward heal them;’

The dandelion is also edible, and Culpeper has this to say; ‘You see here what virtues this common herb hath, and that is the reason the French and Dutch so often eat them in the Spring; and now if you look a little farther, you may see plainly without a pair of spectacles, that foreign physicians are not so selfish as ours are, but more communicative of the virtues of plants to people.’ Don’t you just love him?

The dandelion is of the Asteraceae family, and each flower contains many small flowers or florets together on a composite flower head. The seeds are produced without pollination (very effective) this results in plenty of offspring, and these offspring are identical to the parent plant, unlike the bluebell as seen previously.

It appears, according to Jordan ‘that word Taraxacum derives from the Greek, and means “to disturb or alter the state of something.”’ Perhaps it is worth pausing to consider this. Who as a child has not blown a dandelion seed head, and counted to tell the time, yet perhaps another use of the dandelion seed head could be for bearing messages on the wind, blown afar, and with intent.

Scott Cunningham places the dandelion as ‘Masculine’, under the ‘Element: Air’, and the ‘Deity: Hecate’ and placed the under the dominion of the planet Jupiter which does appear fitting. Plants under the authority of Jupiter demand attention. I certainly couldn’t ignore these plants on this bright April morning. It also appears that Jupiter is ‘the eternal optimist, so its plants never become discouraged, even when growing conditions are less than ideal.’ Jupiter’s plants, ’are extremely hardy, able to survive a crowded urban environment and even inclement weather.’ It is also said concerning Jupiter that, ‘this planet governs the liver and lungs. Its herbs are considered beneficial to these organs and to all diseases that stem from corruption of the blood.’ http://www.stariq.com/Main/Articles/P0001553.htm

The use of the sap from the flowers stem, placed directly to remove warts is a well known country remedy, and the root can be roasted, ground and drank as a coffee substitute. The flower can be made into a country wine, and a summer drink, still sold in supermarkets contains, or is said to contain, dandelion and burdock. What a useful little plant this is.

Email ThisBlogThis!Share to TwitterShare to FacebookShare to Pinterest
Labels: Spring