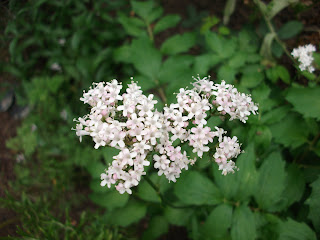 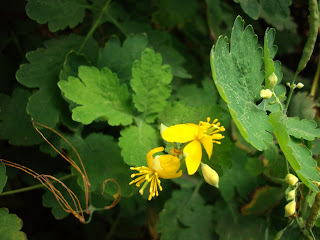 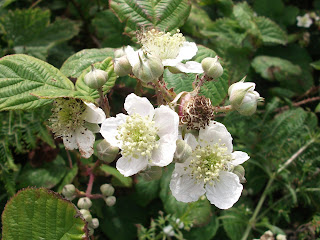 The blackberry or bramble is a very common lady here in the South East of England, as I am sure it is in other parts of the U.K, in fact there are very few places where you can wander a little from the pavement, and not become tangled in a bramble, or perhaps the bramble may become entangled in you. Very quick to try and colonise any waste ground, its tenacious branches root easily wherever they can manage to find a piece of spare earth. Straddling great heights and then diving head first towards the earth in search of fresh ground on which to take root, the blackberry often manages to construct a natural arch with many uses only limited by the imagination. In its second year of growth this cane produces lateral shoots and begins to focus on flowering and producing berries. It can do this in sun or shade, come rain or shine, on rich or very poor stony soils, but appears, as with most, to be happier with adequate supplies of sun and water, and in these conditions produce the choicest berries. Its tolerance of most conditions means that once established the bramble becomes very difficult to remove.  And in this image below is very happily growing inside this vehicle. 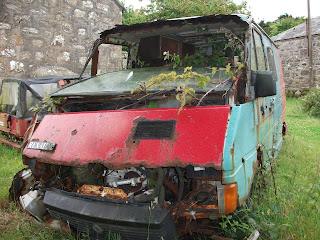 Some thoughts on 1734 and tradition.

Joe Wilson frequently spoke of 1734 as a method or a system rather than a tradition. He pointed out that it is the nature of a tradition to be handed down or passed on, so in truth one can't start or invent a tradition straight away, one can only build a system  and then pass it on to another, and when they have passed it on in turn, then it truly becomes a tradition. In this sense, as I start to teach 1734, and do indeed pass it on to others, then it becomes a tradition in our hands. 1734 teachings were given to me by Joe, I develop them and pass them on. If you are unlucky enough to be taught by me, we make it  a tradition.
It is fair to say, from this perspective, that there are a number of 1734 traditions, groups that have passed on 1734 teachings through several generations. Many of these are not well known to me, I can't validate or authenticate them, nor, for that matter, can I invalidate them, coerce or dominate them, and thank goodness for that. When, at the very end of his life Joe decided to appoint three guardians of 1734, he did not hand the reins of power over to us, giving us full authority over all 1734 groups, it is not a position of power, but responsibility. We are honour bound to represent 1734 honestly, clearly and fairly, and this means not only expounding the basic teachings, but recognising an element of variability among the groups and traditions that emanate from Joe, the Wilsonian stream.
There is something very important here, we obviously have to acknowledge the very powerful influence of "Robert Cochrane" and the debt to the material in his letters to Joe, but we are not exactly "cochranian" witches, we are Wilsonian. We are happy to recognise the Clan of Tubal Cain as both kith and kin - and as much loved friends, but we are also distinct from them. This has been recognised on both sides, so while, for instance, Shani Oates has been generous with information and advice, it has never been forced upon us and always with the proviso that it might not be entirely suited to our stream, we have to decide.

Nevertheless, it is certainly true that much of the material available about the Clan of Tubal Cain is entirely relevant to us. What it does need, however, is to be recast in our image, it requires a transformation into something new by our understanding of an idea rather than simply copying what has been done before by others. It is frequently this that distinguishes Traditional Witchcraft, the protean transformation of what is given, endlessly making new what is old and what is passed on by others.
Posted by Serpentstang at 11:52 No comments: