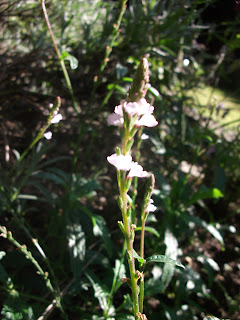 On Saturday 20th August we attended the Summer of Love organised by Scarlet Imprint. (http://www.scarletimprint.com/) In my opinion it was an unusually successful day in which all the talks had a lot to offer and some were really marvellous. The venue, the Brighton Unitarian Church, proved to be a surprisingly comfortable and adaptable place, albeit with limits. The day began with Nicholaj de Mattos Frisvold talking on Pomba Gira and following up with a brief rite in her honour. The talk was hugely interesting, although occasionally difficult to hear properly, even though Nicholaj is a good speaker and the rite was difficult to see, as it was held at the side of the building in what was really a short alley. But what we glimpsed was interesting and there was the tiny shrine to her at the end of it with roses and cigarettes and wine.
This was followed by Jake Stratton Kent's "Familiar and Unfamiliar Spirits". Jake is a lively and engaging speaker who obviously has a good grasp of his subject as he led us through a reconceptualisation of the Goetia, not as evil demons, but as spirits, some friendly and sympathetic, some difficult or even dangerous, but who can be approached and engaged with in a very different way to the traditional magician in his circle, calling up goetic spirits into a triangle. Clearly one still needs safeguards, but one need not make a prisoner of them.
Between them these first two talks set up the themes and the mood for much of what followed, Stephen Grasso's talk "Smoke and Mirrors" was really a reading of an intense prose-poem of urban magics, good, but it would have been nice to have more of Stephen talking to us directly, discussing, engaging. Peter Grey followed on with a talk considering notions of sacrifice in the grimoires with a definite Luciferan angle and a very natty line in green frilly shirts! This was followed in turn by a talk by Alkistis Dimeche on Butoh and ritual. I have to say that for me it was fascinating, but it was a little unformed, she seemed to veer from being really utterly in command of her material to getting a little lost in it. A bit more focus and maybe some trimming down and finishing with some discussion would have made it a masterly talk.
Nothing prepared us for Ulysses Black's talk though, which gave a brief history of his involvement with both performance art and magic, the use of black mirrors and trance and which culminated in him pouring a large jar of honey over himself. The talk was funny and relevant and believe it or not, so was the honey-pouring.
The evening gave us dancing from Michael Azzato and Alkistis and at the end Stephen Grasso was spinning some vinyl, but really we were flagging by then and in need of food and drink.
Quite apart from the actual events it was wonderful to meet friends such as Shani Oates and make new friends, meeting Nicholaj, Mogg Morgan and many others. When you are not a fixture on the occult social scene, socialising with the occultists can be a terrible chore sometimes, but here it wasn't. people had  a good and friendly attitude, and "attitude" was not a problem, that grisly egotism of trying to be cooler than thou. Well, I suppose it is always present, and nobody is immune, certainly not me, but it didn't get in the way of interesting and friendly discourse. So, all-in-all  Scarlet Imprint are to be congratulated on a well-organised event that was friendly, intelligent and focused. Many thanks and I hope they stage another event before too long.
Stuart
Posted by Serpentstang at 12:51 1 comment: