Woodland Walk at the end of March 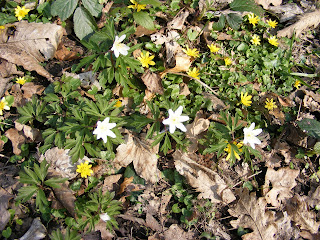 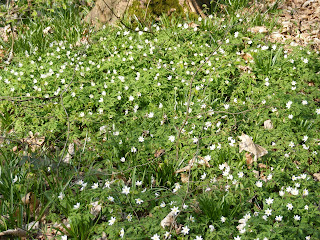 The woodland floor, is now carpeted with Wood Anemone, or Anemone nemorosa; the windflower; a joy to behold.

It appears that in Greek Mythology, the Anemois, or wind gods sent forth Anemones as the herald of spring. (Very kind of them too, me-thinks) Culpeper says of the windflower that ‘the flowers never open but when the wind blows’. He then adds, ‘Pliny is my author; if it be not so, blame him.’

Nemorosa, refers to its woodland habitat, dancing in a carpet of froth shimmering across the woodland floor and sharing its abode happily with its neighbour, lesser celandine.

Its bedfellow, the lesser celandine, springs from the Latin chelidonia meaning swallow, as it was said that the flowers bloomed when the swallows returned.

Both plants belong to the genus Ranunculus. And the name Ranunculus is said to be ‘Late Latin’ for ‘little frog’ as they, (all Ranunculus genus) are often found near water, and then of course near the frogs and toads. Although the lesser celandine is found also down by the river and ponds where the frogs and toads live, these images are from the woodland floor. It appears to me that it is perhaps at the time when these pretty little heralds of spring are in flower that you will get a delightful glimpse of the frog and toad population of local ponds and pools.

Culpeper places the lesser celandine, or pilewort under the ‘dominion of Mars,’ and he goes onto indicate that if you dig up the root, you will find they resemble piles, and it appears, according to this learn-ed gentleman that that an oil, ointment or plaster of the root or leaves, will ‘readily cure both the piles and haemorrhoids, and the Kings evil.’ His excitement jumps from the page in this entry, must go try it, well maybe not, forgot I very fortunately don’t suffer from piles or haemorrhoids, nor the Kings evil. (Wikepedia tells us ‘the Kings evil is ‘Tuberculous cervical lymphadenitis refers to a lymphadenitis of the cervical lymph nodes associated with tuberculosis. It was previously known as "scrofula"’)

Now back to the windflower and Culpeper’s wisdom. He places the wood anemone under the dominion of Mars , ‘being supposed to be a kind of Crow-foot.’ He doesn’t sound too sure about that one, but a relatively safe assertion medicinally. However it does appear that the wood-anemone is poisonous, so whatever Culpeper recommends with all conviction, in the way of ingestion, please don’t try it.

Email ThisBlogThis!Share to TwitterShare to FacebookShare to Pinterest
Labels: Spring