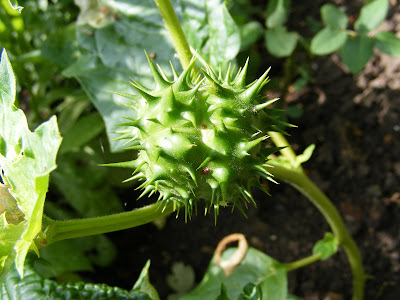 The Datura, Devil’s apple or Jimson weed is yet another member of the henbane family of the order of Solanceæ. There are as many as fifteen species in the genus Datura found in warmer places throughout the globe however it is the plant better known as the thornapple that I will be examining briefly here. This thornapple according to Mrs Grieve, emits ‘ a  rank, very heavy and somewhat nauseating narcotic odour. ’ (I rather like its aroma). ’The  fœtid odour arises from the leaves especially when they are bruised, but the flowers are sweet-scented, though producing stupor if their exhalations are breathed in for any length of time.’ I must say I did enjoy my dreams whilst the young plants were growing on my bedroom windowsill before finding their place outside. The white trumpet shaped flowers show themselves for most of the summer, opening in the evening they attract night flying moths with the fragrance they emit. Following the flowers there appears a large spiny egg shaped seed capsule, roughly the size of a large walnut.  These capsules, when ripe, turn brown and split into four to allow the many seeds to be dispersed.

Mrs Grieve states that ‘In early times, the Thornapple was considered an aid to the incantation of witches,’ (she doesn’t say how) ‘and during the time of the witch and wizard mania in England, it was unlucky for anyone to grow it in his garden.’
She also indicates that ‘It has been conjectured that’ its leaves were ‘used by the priests of Apollo at Delhi to assist them in their prophesies in the temple of the sun. ’She also indicates that the Peruvians made an ‘intoxicating beverage from the seeds which induces stupefaction and delirium if partaken of in large quantities.’
Cunningham places this plant under the rulership of Saturn and the element water. He places its element as water, and indicates that it can be ‘used to break spells by sprinkling it around the home.’ I do suppose he means an infusion rather than sprinkling the seeds around. He also states that ‘If insomnia persists night after night, it may be cured by placing some datura leaves into each shoe and then setting the shoes under the bed, with the toes pointing toward the nearest wall.’
Roaming over to Mexico, I thought I may add this little gem of information found in Witchcraft Medicine, Healing Arts, Shamanic Practices, and Forbidden Plants, where it appears one may still buy a salve called pomade de toloache, said to contain toloache the Mexican datura, following this statement is  the following quote;
‘It is very rare that a toloache salve from pork lard and datura leaves is still made in Mexico. There are still “witches” who sell their datura pomade, because it is supposed to make men superfluous. This is the exact counterpart of the witches’ salves of the Middle Ages which were made from henbane and thorn apple. (Schenk, 1954:79)
Hmm; maybe I see a new career on the horizon. ;-) 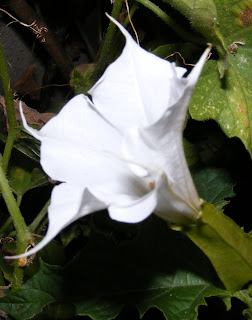