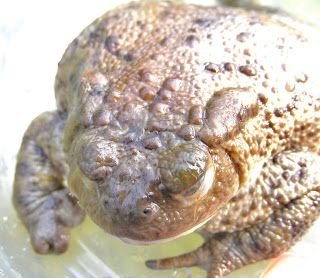 On 27th March 2011 I collected a dead toad from the pond in Chinbrook Meadows, fairly large in size, perhaps a female. At approximately 11 O- clock in the morning, barely scraping into British summertime, as the clocks went back at 2 o-clock this morning. Sun-rise was at 6.48, (Greenwich Mean-Time) Incidentally sunset will be at 19.25; this gives us a day of 12h36min and 06 seconds in duration, that doesn’t have much to do with any of my thoughts, but just thought I would lob it in for good measure.

So, it appears that I may have collected the toad in the 5th hour of daylight, if my calculations are correct, which would place the hour under the planetary rulership of Saturn. This seemed to me to fit rather snugly as; ‘Saturn's aspect generally involves the bringing to the collective attention the realities of responsibility, limitation and finitude.’(http://planetaryinfluence.com/forecasts/2010/Mar/ the finite existence of the toad, was certainly very apparent, which made me contemplate the nature of my own existence. However what appeared as more important than the planetary aspect at the time was the influence of the sun; which, breaking through the mist, started warming the air all around me, and continued to so for the duration of this late March day. Not enough however, to provoke the large toad population into another sexual frenzy of activity witnessed by Stuart and myself two days ago. It all appeared to make the Marquis De Sade seem like as Enid Blyton.

Apparently ‘Because Bufo bufo is an explosive breeder and there is high competition for females more than one male may grasp onto the female forming multiple amplexus or a mating ball. In some cases (including in Bufo bufo) females can be swamped and drowned by eager males.’ http://www.sheffield.ac.uk/aps/mbiolsci/kate-hutchence/abouttoads.html

Oh dear; it does appear that this may have been the eventuality that befell my poor toad. However, this was exactly what I needed to perform the Toad Bone Ritual, so; as one would say ‘waste not want not;’ a lesson learnt from nature herself. So homeward I trod; that sounds as if I had to trek the wilderness whereas in reality, this is but a few hundred yards.

I took my treasured find into the garden, and with due ceremony and a sprinkle of sacred water, she was interned; there for the ants and other very small creature to do their work; and hopefully leave me with the bones. I also thought, best mark the spot, of the burial, as I didn’t fancy having to dig up the whole of one side of the garden to enable me to uncover my hidden treasure. And as Stuart has reminded me, the bones will be very small.

In the past; when a fox decided to surrender its life in my little plot he, or she, very kindly did so under a rose bush, so apart from the danger of poking my eyes out and shredding my clothing, there was little danger of me actually forgetting where my treasure was placed.

So back to the Toad Bone Ritual; when taking into account the way this toad died, its death, it appears was during the act of attempted generation. A reminder to me that I am giving up the pursuits of the flesh, to follow the journey beyond, I will, over the coming month, identify with the flesh of the toad now leaving its bones and will examine what this means to me, in the mean time.........more to come......